Situated in the heart of Kendal, Wainwright’s Yard is a custom designed shopping area, owned and managed by the Eric Wright Group.

An old market town, Kendal is characterised by its narrow Yards (lanes) that branch off from the main street. The use of buildings in the Yards varied from small shops run by local trades-people to homes and stables for animals. Once there were around 150 Yards in Kendal – some named after well-known citizens and others identified by a number; Wainwright’s was Yard 28.

In 2004 when redevelopment of the area started, Yard 28 was renamed Wainwright’s Yard, in memory of former Kendal borough treasurer Alfred Wainwright. Alfred is the celebrated author of the Pictorial Guides to the Lakeland Fells.

We were first contacted midway through 2014 by the Graphic Designer managing the project: The Design Attic.

Development plans included the refurbishment of a pathway at the front entrance to Wainwright’s Yard.

The aim of the refurbishment was to make Wainwright’s Yard more noticeable and appealing from the high street, which would in turn lead to an increase in footfall.

Using colours from the existing branding and signage throughout the Yard, the pathway was designed to enhance the entrance and entice shoppers to explore the wonders of Wainwright’s Yard.

Our Installation Team created the letters for the Wainwright’s Yard logo here at SureSet using stencils and 3mm recycled glass in Elephant Grey.

Over three days, four men formed the background with 3mm Gunmetal Grey, created the distinctive circles of the pathway design using 3mm Aqua Blue and the lettering for Wainwright’s Yard they had previously made.

The finished pathway is a vibrant eye-catching design that certainly draws people into the previously uninspiring lane into the custom designed shopping area.

“SureSet was the only product we had come across that was up to the job; the main plus points were the extensive colour range and the fact that it was permeable.”

In 2020 the EcoBatcher will save a project of this size 38 single-use plastic buckets! 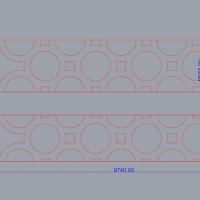 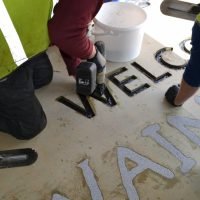 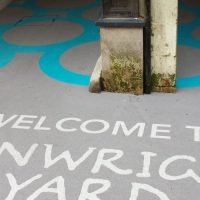 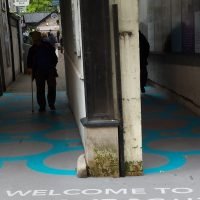