Standing majestically on the headland of the North Cornish coast, the 4* Headland Hotel first opened its doors in June 1900, built with the sole purpose of creating the finest hotel in South West England.

In 2014 the hotel completed an improvement and refurbishment project offering guests another level of luxury, complete with a new Spa. The Headland Hotel is now Cornwall’s only ‘Five Bubble’ rated spa hotel.

Its position on the headland with the Atlantic sea just below, meant that any work to the hotel’s exterior needed to be tough enough to withstand the heat of the summer months and endure the pounding of the Atlantic.  This required a product that was extremely durable, permeable, weather resistant, UV stable and would also visually complement this award winning establishment.

Contracted to help improve the exterior of the hotel by creating a seamless, modern finish that complimented the age of the building, we began work there in 2012.

For the first phase our Installation Team hand laid 6mm Barley Beach to a raised patio area, to the left of the hotel. The skylights overlooking the indoor pool of the new Spa were expertly incorporated into this installation.

The second phase was installed in Spring 2014 when our Installation Team laid 6mm Barley Beach to the front patio of the hotel. For the patio outside the restaurant, to the right of the hotel, we made and supplied PermaSlabs® in Barley Beach. In a standard paving slab format, PermaSlabs benefit from the same qualities as our permeable resin bound paving. These were installed by the hotel builder JE Stacy & Co.

All three sides of the exterior of the Headland Hotel are now a seamless blend of SureSet permeable resin bound paving in Barley Beach, a colour that perfectly complements the adjoining surfaces and surrounding environment.

The raised patio installed in 2012, is now complete with comfortable outside furniture for eating, drinking or relaxing amid the beautiful views over Fistral Bay.

“We are really impressed with the finished result of SureSet. It looks amazing and is really easy to maintain – the paving project that was laid two years ago still looks brand new. SureSet were really accommodating during the most recent project installing PermaSlabs and made some custom sized slabs to ensure the seamless finish we are striving to achieve. I have no doubt that we will use SureSet again the in the future.”

In 2020 the EcoBatcher will save a project of this size 210 single-use plastic buckets! 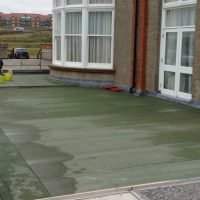 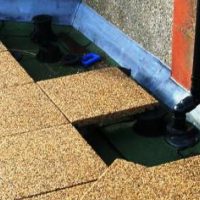 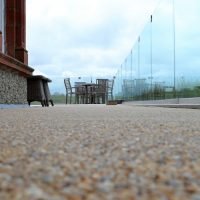 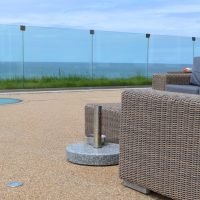