Redrow was established as a small civil engineering company in 1974, embarking on its first major housing development in 1979 and celebrating their 50,000th customer in 2006.

Daleside Meadows is a great location that is in easy reach of the city, beaches and even Blackpool Pleasure beach.

Contracted for the landscaping, BRK Landscaping Contractors, contacted us at the beginning of October about installing a resin bound logo.

As part of the landscaping project, Redrow wanted their distinctive logo installed at the entrance to their development.

We love a creative paving project, and so we’re delighted to receive the call!

After consulting with BRK Landscaping and Redrow, the colours were agreed upon and the logo was installed at the end of October.

The Redrow logo sits within a mound, in the landscaped area outside the Sales Centre, flanked by Redrow flags.

Using colours from our range of recycled glass, the background was laid in green to blend into the surrounding grass, with the red outline standing out perfectly due to the addition of Chalk White on the inside of the SureSet resin bound logo.

With housing developments appearing in almost every town and city at the moment, there’s certainly no mistaking that you have arrived at Redrow!

In 2020 the EcoBatcher will save a project of this size 4 single-use plastic buckets! 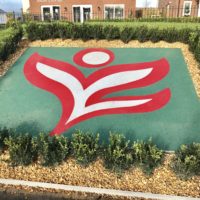 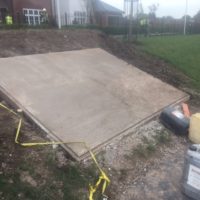 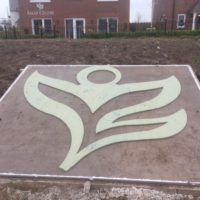 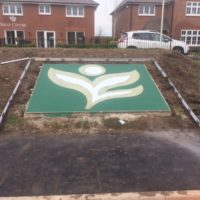 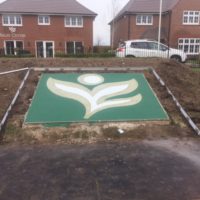