On the site of Woodnesborough Colliery, the Hammill Brick Company was formed in 1926 and at its peak was producing 180,000 bricks a week!

Due to a slowdown in the building industry, Hammill Brickworks closed in 2008.

In 2011 a proposal was submitted by Quinn Estates and Hammill Properties to develop the site for both commercial and residential use.

Six years later, and part of a wider regeneration project to transform the former Hammill Brickworks into one of the most desirable developments in Kent; permission was granted for 19 self-build homes and 24 light industrial units.

With 19 plots, this is one of the largest self-build developments in the county and they were all very quickly reserved.

We were contacted by Aylesham-based, Datum Groundworks Ltd with regard to installing a resin bound driveway to one of the self-build properties.

As with all self-build projects the environmental considerations of all materials used are high on the agenda – making SureSet permeable paving the perfect surface choice.

When SureSet resin bound paving is laid minute voids are formed that, when cured, mimic natural drainage by allowing water to pass through to the sub-base.

Our Approved Installers were on site in January to install a beautiful 290m² driveway in Barley Beach natural aggregate to this brand new self-build.

This magnificent looking driveway provides the look of a sweeping stone driveway without the inconvenience of loose stone.

The permeability of SureSet resin bound paving allows for the efficient dispersal of water which brings a wide range of safety, comfort and maintenance benefits including:

In 2020 the EcoBatcher will save a project of this size 232 single-use plastic buckets! 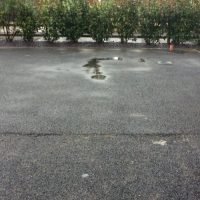 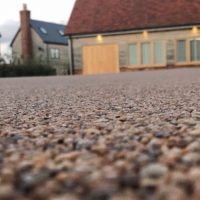 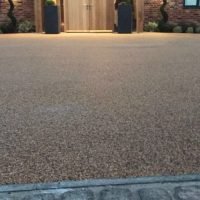 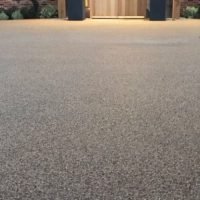