While meeting modern needs, the 275,000 square foot purpose built retail and leisure scheme, was designed to link to the existing town centre via a new curved pathway outside the proposed new Sainsbury’s flagship store.

Branding for the new development features a coloured stripe which was designed to be incorporated into the public realm, creating a comprehensive, cohesive theme through the retail and leisure scheme; uniting the different ‘blocks’ and public realm.

The colourful branding was incorporated into the elevations and a footpath leading from the new development to the existing town centre.

Our Spectrum® range of coloured recycled glass was specified for the striped pathway.

With the retail and leisure scheme – and SureSet striped footpath – now complete, companies are starting to move in.

It’s anticipated that the development will be fully occupied with well-known stores including TK Maxx, Prezzo, Poundland, Simply Gym and Costa Coffee by spring 2016.

In November, Sainsbury’s was the first store to open and Cineworld – Hinckley’s first cinema for 20 years – opened at the beginning of December.

The opening of Hinckley’s long-awaited cinema has received a lot of media coverage, most of which has been filmed to the back drop of the super SureSet striped pathway.

In 2020 the EcoBatcher will save a project of this size 126 single-use plastic buckets! 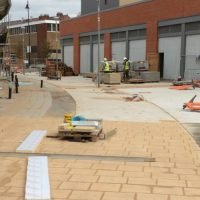 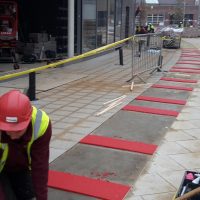 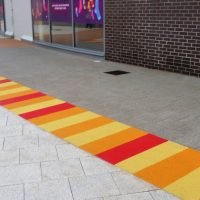 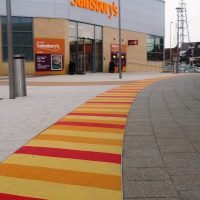