Originally a chapel, Redland Parish Church was built in the 1740’s and become a parish church when Redland parish was formed in 1942.

When the church was built, in a north-west suburb of Bristol, the area (which later became Redland) was almost entirely rural.

Since then Redland has evolved into a thriving residential community with very different needs from its predecessors.

As a very active church, catering for the whole community with a pre-school, clubs for teenagers, support for local schools to deliver RE lessons and even a cricket team, Redland Parish Church needed more space…

The proposed building was to be energy efficient and sustainable. Features such as enhanced insulation, efficient mechanical and electrical plant and solar panels were incorporated into the design.

For its environmentally friendly credentials, SureSet resin bound paving was specified for a new accessible pathway, and we worked with the Kitto Group to complete the project on schedule.

The fantastic new hall is now open and the Church has been able to increase its activities with the installation of internal partitions that allow the hall to be divided up to three separate areas without disruption.

Laying SureSet onto permeable asphalt has created a fully permeable, SuDS compliant surface which complements the other eco-friendly design features incorporated into the building, including improved insulation and solar panels.

People using the new Parish Hall benefit from a beautiful looking, smooth and accessible footpath, while the volunteers who run the hall enjoy a surface that requires minimal maintenance.

In 2020 the EcoBatcher will save a project of this size 288 single-use plastic buckets! 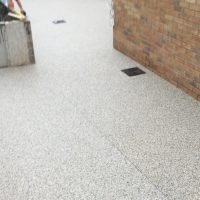 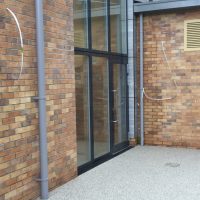 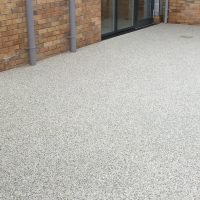