One of the many vital services essential for ex-service men and women is housing. RBLI provide 48 houses and 33 bungalows for ex-service families within the Royal British Legion Village in Aylesford, Kent.

In the village was a Memorial Garden, set against one of the original walls of Preston Hall estate, it’s a pretty place used to commemorate Remembrance Day. Due to the increasing numbers of people attending this annual event, and to mark the World War One centenary RBLI decided to transform the existing Garden into a Garden of Honour; a national memorial dedicated to the bravery and sacrifices made by our Armed Forces every day. The larger more accessible Garden of Honour will be available for events throughout the year.

RBLI set a fundraising target of £300,000 which has been well supported with donations from Trusts, Foundations, local businesses and individuals. Horticultural students from the nearby Hadlow College were also involved in elements of the landscape design and planting.

SureSet was contacted by the contractor G A Harpers in August 2014 and on a windy October day our skilled Installers created a stunning 18m² poppy motif using 3mm recycled glass in Traffic Red, Traffic Black and Cobalt Blue.

Designed by Clague Architects, The Garden of Honour has several distinct areas including a bandstand, a quiet memorial garden, a small parade ground and the distinctive RBLI poppy, installed by SureSet.

The main construction of the new Garden of Honour was transformed in time for the 2014 Remembrance Day ceremony.

In 2020 the EcoBatcher will save a project of this size 15 single-use plastic buckets! 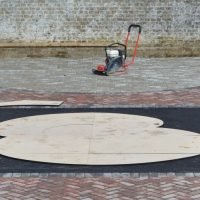 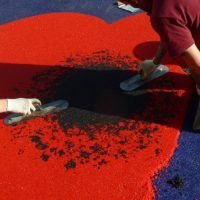 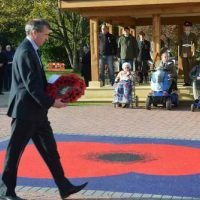