“Exceptional is the word to describe Pennine Playgrounds.”

For 20 years, Silsden based Pennine Playgrounds Ltd have been partnering with Local Authorities, Primary Schools and Academies, Nurseries and Early Years Units. They have six teams of DBS checked site engineers – all fully trained, certified in Health and Safety, Good Working Practices and fully up to date with the latest industry standards.

In 2014 they decided to introduce resin bound paving into their product range and after extensive training Pennine Playgrounds Ltd became a SureSet Approved Installer.

In November 2017, we were contacted by Tracey Fullard who was looking for a company to inspect a driveway she’d had installed by another resin bound company based in Harrogate around two years previously and we put her in touch with Pennine Playgrounds.

The resin bound driveway had developed spots on the surface and was sinking in places. It was laid onto her existing concrete drive, which in her words ‘was not in good order’ – it is not known if the concrete was repaired before the resin bound paving was laid as there was no one present for the installation.

The driveway was also extended at the same time, but had laid onto a Type 1 sub-base – which is not recommended.

When Ms Fullard reported the spotting and sinking to the resin bound company who carried out the installation, she was told that the spots were caused by too much sand in the mix – this is actually caused by iron ore deposits in the natural aggregate and the sinking is a result of laying the resin bound paving onto an unsuitable sub-base. They refused to honour their 15 Year Guarantee.

Following an assessment by Pennine Playgrounds, Tracey Fullard appointed them to remove and replace their resin bound driveway.

Once the surface was taken up, it was clear that the original concrete base was not structurally sound, so a new asphalt sub-base was laid prior to laying the SureSet.

Tracey opted for the neutral colour of Barley Beach to replace their 45m² driveway and is absolutely delighted with the results.

“EXCEPTIONAL is the word to describe Pennine Playgrounds.  Having had a sub-standard resin drive laid, which started marking and sinking we were desperate to have it rectified.  Graham Braithwaite the company MD visited us and advised us what was required.  The office staff were friendly and helpful responding to my calls and emails promptly, understanding the stressful situation we were in.  The team completing the work were, prompt, organised, respectful and extremely knowledgeable.  The new drive is fantastic due to the pride the team take in their work. I would recommend Pennine Playgrounds to anyone without a second thought. A huge thank you to each and everyone of you.” 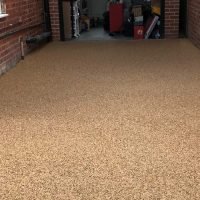 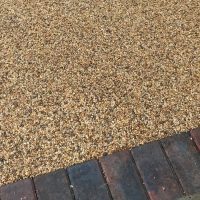