Built in the 1830s, number 3 Abbey Road was originally a nine-bedroom townhouse. The third oldest house on the Eyre estate was bought by the Gramophone Company (predecessor to EMI) in 1931 and officially opened as EMI Studios on 12 November 1931.

Universal Music took control of part of EMI including number 3 Abbey Road in 2012. In 1970, following the success of the Beatles eleventh album, the name of the studio was changed to the one we are all familiar with today – Abbey Road Studios.

Planning permission was sought and granted in 2014 for a multi-million-pound expansion project which began in 2015. Part of the project included a gift shop at number 5 Abbey Road which is next door to, and part of Abbey Road Studios.

We were contacted at the beginning of October for an urgent permeable solution to the ramp built over roots of a protected tree outside number 5 Abbey Road; home of the new Abbey Road Studio gift shop.

Kingly Developments, managing the project wanted to recreate the iconic zebra crossing associated with the Beatles and Abbey Road Studios for the ramp.

SureSet was specified to be laid over the concrete ramp into which holes were drilled; allowing water to drain through SureSet permeable resin bound paving and channel through the holes to the roots of the tree.

The zebra crossing themed entrance to the new Abbey Road Studio gift shop is a perfect way of uniting number 3 and 5 Abbey Road with the history of the studio and the Beatles.

For us it was another exciting project that perfectly demonstrates the unique ability of SureSet to combine outstanding attractiveness and creativity with practicality and sustainability.

In 2020 the EcoBatcher will save a project of this size 14 single-use plastic buckets! 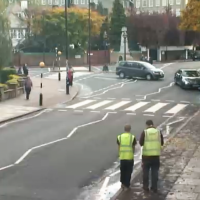 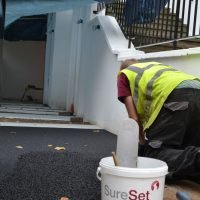 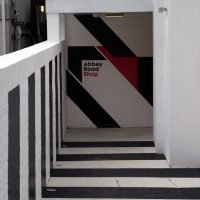