Orchard Square, in the hustling social centre of the Gloucester Docks has just undergone a major upgrade with the aim of creating a piazza-style public space, including complete resurfacing, new lighting and timber benches to make the area a more comfortable and pleasant place for residents and visitors to enjoy.

Gloucester Docks has been a huge attraction for the city since the first day of its opening, in April 1827. It is reported that a huge crowd gathered to watch the first vessels enter the basin amongst firing guns and ringing church bells. The docks were soon filled with local merchants taking advantage of the countries most inland port, transporting goods further inland through the countries canal network to supply the growing industrial towns in the Midlands and South West.

Soon after opening, there was a need for warehouses to be built around the docks and further canals were introduced to deal with the increasing volume of trade coming into Gloucester. In the 1840’s it was agreed that railway links would be needed to help move goods, and these railway tracks are still visible in the modern-day redevelopment as one of the many historical features that pay tribute to what the industrial docks once possessed.

By the turn of the 20th century with the increase in size of the trading vessels, and the new requirement for petroleum products to the new era in transport and internal combustion engines, the docks became an important depot for fuel and tanker barges. However, with the introduction of underground pipelines in the 1960’s and other developments with the nations road networks, the commercial traffic to the docks soon disappeared.

In recent years the docks became a place for pleasure and the unused warehouses were repurposed. Where ships once discharged their cargoes, there is now visiting narrow boats, smart motor cruisers and the occasional yacht or tall ship. Home to Gloucester Quays Designer Outlet, Gloucester Waterways Museum, The Soldiers of Gloucestershire Museum and Gloucester Quays Antiques Centre. You will also find a range of waterfront bars, restaurants and coffee shops located within the Quays.

The Orchard Square area of the docks, in front of the national waterways museum, is home to some of Gloucester’s most popular events including the annual construction of an ice rink, a beach, a bustling Christmas markets, antiques markets and special one-off events like the creation of a ‘Fan zone’ during the rugby world cup.

Due to its popularity, the paved areas had slowly worn over time and required a new lease of life to withstand the growing visitors to Gloucester Quays.

Rowan Developments, known for their luxurious property developments were requested to tender for resin bound paving by the specifications given by the main landscape architects Gillespies.

The specified materials were discussed, and a bespoke Fusion blend of industrial tones were anticipated.

The once tired tarmac areas were fully restored to landowners desire in July 2018 the SureSet product was expected to consider all scenarios, taking into consideration the everyday traffic expected on the area as well as the numerous special events that would take place.

SureSet worked closely with the planners and together the designed colour blends really worked into the surrounding of warehouses and buildings – a perfect tribute to the industrial past of the Docks.

The resin bound aggregates completely fit the brief with an industrial mixture of durable red, black and silver natural aggregate colours. The industrial railway tracks that dissect the square are a stand out feature and offer real character to the area, with the modern paving and century old tracks sitting perfectly side by side.

This project must be seen to be truly appreciated.

In 2020 the EcoBatcher will save a project of this size 2250 single-use plastic buckets! 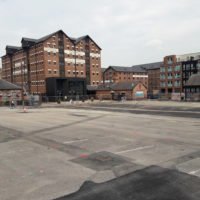 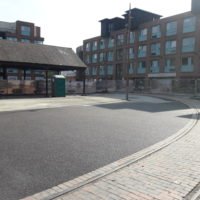 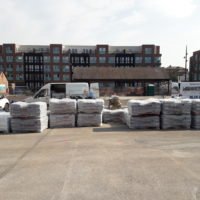 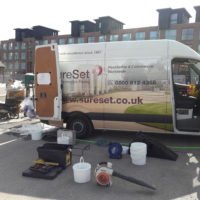 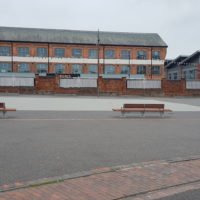 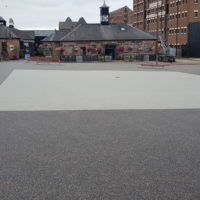 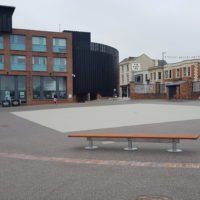 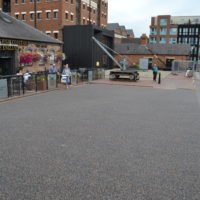 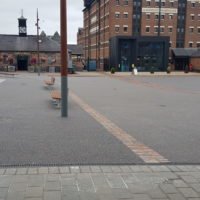