Opened in 1913, Marsham Court Hotel occupies a prime seafront location in the popular South Coast city of Bournemouth, offering guests spectacular views across Bournemouth Bay and a central location for all their holidaying and socialising needs.

The original building owners, a Mr and Mrs Marsh, opened the hotel to accompany their ham curing business, and so the name Marsham (Marsh + Ham) was created. The 13 bedroom hotel proved to be such a popular venue that 10 years after opening, in 1923, the couple bought the neighbouring house and converted the two buildings into a 41 bedroom hotel.

The hotel has remained a family run business throughout the years and was bought by the current Managing Directors mother in 1987.

Recent refurbishments have seen the hotel modernised inside and out including the private heated outdoor swimming pool.

When SureSet were contacted the brief was to provide a smooth, hard wearing and permeable surface that would offer a clean, smart and safe outdoor area for the hotel guests to enjoy the best of the British summer within the safety of the hotel grounds.

SureSet Approved Installer MJS Surfacing were put in contact with the hotel after the initial enquiry had been received. The existing (non-permeable) crazy paving was well overdue an overhaul as well as a request to remove a grassed area and create a more user-friendly surface. In March 2019 the existing paving was removed and replaced with a fully permeable compacted type 3 aggregate and open grade asphalt, ready for the resin bound magic to commence. 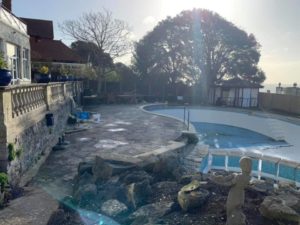 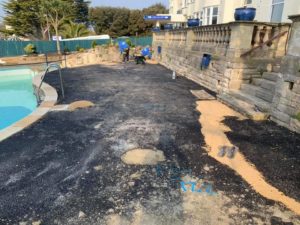 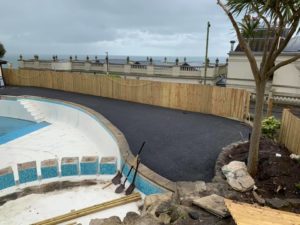 As one of the UK’s best resin bound paving installers MJS Surfacing were also able to offer several bespoke elements to really elevate this installation. The most notable item that sets this project apart were the 7 stepping stones that cross the pool. Each one of the stepping stones was individually shaped and formed using wooden shutters. 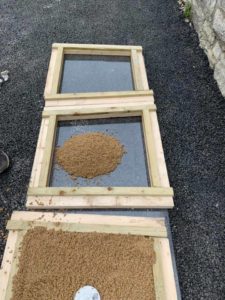 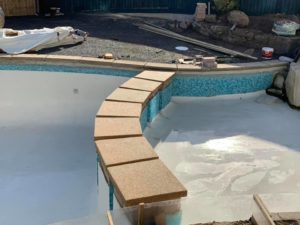 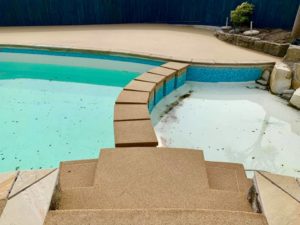 In addition, a more subtle, but equally as exquisite element to the project was the vertical resin bound MJS Surfacing installed. From a perfectly formed 12ft long curved step on the upper terrace to the faces of the steps leading into the pool itself, each one was individually installed with the utmost care and attention to ensure the curves of the pool surround flowed seamlessly. 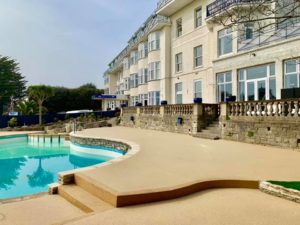 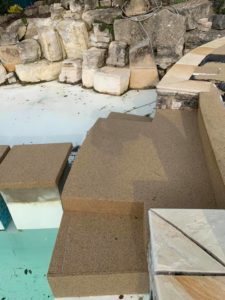 Following the first summer season the hotel had this to say:

“SureSet made the whole process simple. The installation was so smooth and professional. Everyone loves our new pool area and we have had so many amazing comments about how sleek and stylish it looks.”

The swimming pool is available for exclusive use by hotel guests between May and September, but Marsham Court Hotel have plenty of ‘Special interest’ breaks to offer throughout the year including; Arts and crafts breaks, Dance breaks, Bridge breaks and if that isn’t enough to entice you they have also recently won the Dorset Tourism Award for Business Events & Wedding Hotel of the Year!! There are plentiful excuses to pack your bags and head to the beautiful south coast for a short break, enjoy the stunning outdoor pool and other hotel facilities and take in everything Bournemouth has to offer.

In 2020 the EcoBatcher will save a project of this size 240 single-use plastic buckets! 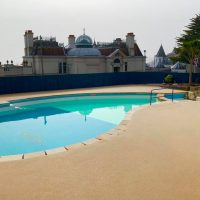 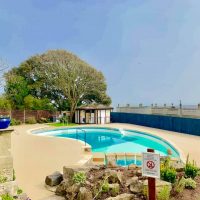 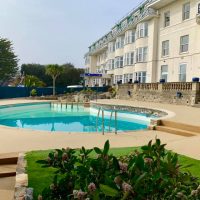 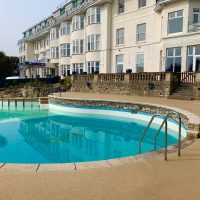 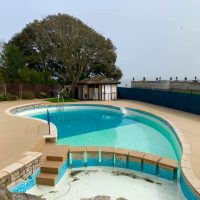 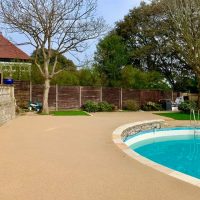 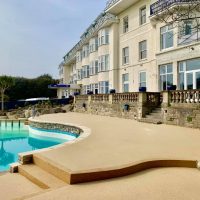 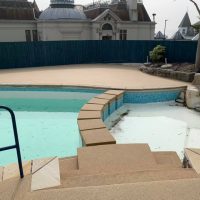