The Country Park in Abbots Langley is over 27 hectares and historically known to belong to Leavesden Asylum and St. Pancras Orphanage. The Asylum held more than 2000 patients and St. Pancras over 600 orphans, both buildings were constructed in the Victorian time of 1868. The Asylum provided jobs for hundreds of locals as everything was done in-house from nursing to sewage works and tending to the 42-acre farmland and its livestock. Mental health was treated very differently back then but the park still stands and certainly still contributes to positive mental health and wellbeing which, to the Northside of the park, includes using some of the original hospital buildings for children’s play areas, three football pitches, an adult outdoor gym, a BMX track and over 20 acres of a woodland area. The south side comprises 50 acres of traditional English woodland and pathways to stroll along whilst exploring a variety of fruit trees, a trellis archways and the largest Monkey Puzzle tree in Hertfordshire.

Since the 1940’s part of Leavesden’s land was authorised to build an aircraft factory where some of World War 2 fighter planes were built, overtime Rolls Royce used the factory to build helicopter engines and 10 years on the factory closed, and the building became an Aerodrome charting flights and teaching potential pilots to fly.

In more recent times the old Aerodrome building is most famous for being the home of Harry Potter, in fact, every single Harry Potter movie was produced at Leavesden Studios – Warner Bros! as well as Wonder Woman, Star Wars and Batman to only mention a few.

In 2019 the park received a £1.2 million National Lottery Heritage investment to improve the facilities and arts available at the Country Park, this project was also funded by Warner Bros Studios and Three Rivers Council. The plan was to incorporate Leavesden’s history and heritage through its community members, ensuring they had local residents and community groups involvement.

Their ethos is about bringing communities and businesses together.

Our highly regarded Approved Installer, The School Renovation Company was contracted to install resin-bound footpaths in various locations around the park.

Winding woodland paths were installed to an 18mm depth in a rounded natural brown stone, 6mm Bronze, chosen to be in keeping with its surroundings and sourced from Grantex. To keep the natural tones of the landscape the staircase had 30m² of the same material installed to the step risers, using a slightly smaller sized 3mm natural stone and finished with a supreme aluminium edging supplied by Dural UK.  Our Approved Installers also had the pleasure of installing various platforms near the Woodlands Café and Leavesden Cycle Hub for the new modern picnic benches that the general public could enjoy using.

A 174m² of a lighter crushed grey stone was used to surround the nine sculptures within the park, each sculpture resembles the community theme of ‘minds, movies and machines’, relating to all of the parks history – the Victorian Mental Health Hospital, Famous Film Makers and the Aerodrome. The resin bound path of 6mm Sterling at 18mm depth, created an easy to follow and accessible trail around the park and its artwork.

The smooth resin bound pathways continue through the park and lead visitors to a brilliant sensory garden (next to the children’s play area) known as Leavesden HIVE, it’s a centre for learning about the heritage and wildlife of the park. The brown resin bound material, bronze was used with a lighter natural stone colour 6mm Norwegian Pearl to segment the learning areas within the garden, the colours in the HIVE were used in this area to signify something new and old coming together.

Leavesden Country Park is a fantastic place to visit and is recognised nationally!

Three Rivers Council is delighted and proud to have delivered this project, for the benefit of the community.

The EcoBatcher will save a project of this size 376 single-use plastic buckets! 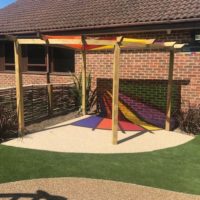