Garden with a Beach Theme

Home » Garden with a Beach Theme

Having moved into their house three years ago, the owners of this extended 1950’s house, Nick and Patti embarked on their back garden project in August 2014.

Overlooked by mature trees, the garden was deprived of natural light and appeared deceptively small. Now settled inside the house, they were ready to introduce some natural light and personality into their outside space.

After the intrusive trees had been removed from the garden, Nick requested a sample panel of their beach design. Our Technical Team prepared this using a drawing from their builder and the bespoke colours our Team were recommending be used to create a seaside effect.

November was a rainy month and following several delays, our Installation Team arrived on site early one morning late in November to bring the seaside to Ealing!

The first part of the installation consisted of 40m² of 3mm bespoke Cream Beige, Natural Aggregate, laid to create the beach and dunes within it. Our creative Installation Team then set about crafting the sea and skilfully recreated the impression of waves coming to shore. This 24m² area was made up of the four colours of Winter Frost, Pacific, Light Blue and Sky Blue from our Spectrum® range and fifteen bespoke shades to create the appearance of the sea lapping the sand.

Everybody who was involved in this project is really pleased with the outcome of this brilliant completely seamless installation.

This installation clearly demonstrates that a bit of imagination, a versatile product and a creative Installation Team make an unbeatable combination!

“The beach has brought light into our previously dark and uninspiring garden. Providing hot drinks during the day was the least I could do, everyone worked so hard and so skilfully, I was really impressed. Patti and I think you’ve all done an excellent job and we’re very pleased with the result. Thanks very much.”

In 2020 the EcoBatcher will save a project of this size 52 single-use plastic buckets! 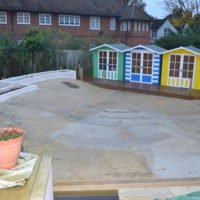 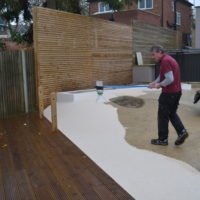 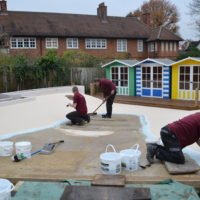 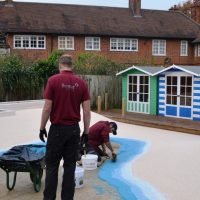 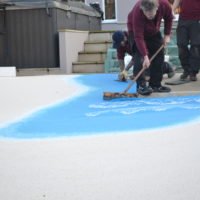 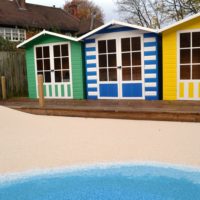