At all the schools pupils will be encouraged to aim for the Taudeedul baccalaureate which will include community service and fundraising targets at each key stage. To achieve the baccalaureate they must reach £1,200 by the time they reach the end of the sixth form.

Head Asiyah Ravat is keen for girls to learn leadership by community work and fundraising, including helping to run one of the Tauheedul Trust’s food banks which will be based at the school.

The 44-year-old mother of three aims to get pupils into top universities by boosting their confidence with community projects, visits to university and preparation for interviews and entrance tests.

She plans intensive work with those aiming for Oxford and Cambridge or popular courses such as medicine to help her pupils compete with teenagers from fee-paying schools and more affluent areas.

Mrs Ravat pledges the school will teach British values in line with education secretary’s Michael Gove’s definition. The definition is respecting the law, individual liberty, tolerance and respect for people of other faiths.

The school will give priority to Muslim pupils but will be open to pupils of other faiths and no faith at all. Mrs Ravat says pupils of other faiths won’t have to join in Muslim worship but will be able to worship in their own faith, or in the case of non-religious pupils, do something other than praying. The school has proved popular with just five places unfilled for September.

With permanent school buildings planned on the site of the former Coventry and Warwickshire Hospital, the temporary building for Eden Girls’ School opened in September 2014.

Eden Girls’ school is a new secondary free school for girls aged 11-18 and is one of two new faith schools for Coventry.

The schools have an inclusive approach to faith, welcoming pupils of all faiths and none and are part of a successful family of schools, run by the Tauheedul Free School Trust.

Construction of a permanent £10.5 million school began in January 2015, right alongside the site of the temporary building in Foleshill, Coventry.

Thomas Vale Construction, who were appointed to build the new school, contacted us in September 2015 to discuss the installation of the school logo at the new main entrance.

The school logo is a purple and grey ‘star’ design.

Our recycled glass range Spectrum® is the most popular choice for reproducing logos. While our Elephant Grey colour was perfect for the grey of the Eden Girls’ School logo, the purple required a bespoke blend.

We are able to offer bespoke colour matching because we colour recycled glass in-house.

Our Technical Team worked with Thomas Vale, who liaised with the school, to produce a bespoke colour blend for the purple of the logo. There was a bit of ‘toing and froing’ before the exact colour was agreed, but we got there in the end!

Our skilled Installation Team installed a 26m² logo for Eden Girls’ School in 3mm recycled glass in the colours of Ultra Violet and Elephant Grey.

In 2020 the EcoBatcher will save a project of this size 12 single-use plastic buckets! 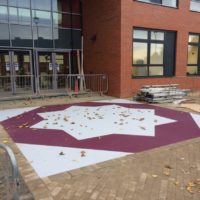 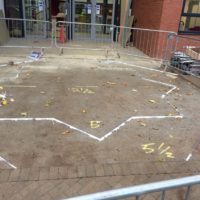 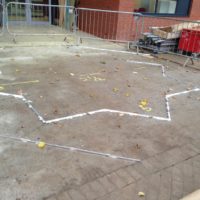 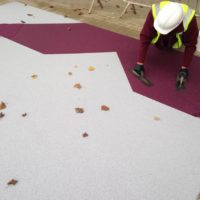