15 years on, and still going strong!

The “European Community of Stones” (ECOS) Amphitheatre in Frome, Somerset has long been at the heart of the local community since its creation in the early ’90s. Located next to the popular Merlin Theatre, and on the campus of Frome Community College, the Amphitheatre has seen countless performances by college students, bands, local and international theatre groups, with a particular highlight being the ‘Virtual Festival’ hosted in 2000. This project involved the creator of the original artistic concept, Barry Cooper, connecting the theatre with schools from the European country’s that originally donated stones to the project, and included a huge community performance involving giant puppets and up to 500 local actors.

SureSet caught up with Barry to discuss the inception of the project in the ’90s, and how he worked with the SureSet founder Peter Watts throughout the project and subsequently how SureSet became involved.

“The European Community of Stones was originally conceived as a way to bring together the 12 founding countries of the European Union in 1992. The outdoor space was created to nurture cultural exchanges between young people throughout Europe, invite international festivals and performances to the area and also to encourage communities across Europe to follow suit and create ECOS amphitheatres of their own. Nowadays, With Brexit on the imminent horizon; about to turn this unique site into a fossil, returning to revive the paving back to its former glory will act as a valuable reminder of the history and heritage this site holds.”

During the Construction of the Amphitheatre, the Project Director Peter Chapman selected the giant stones from their country of origin with a view that they would compliment each other, and careful consideration was taken on their final locations around the Amphitheatre. Shipping of the giant stones was provided free of charge, and local quarry companies worked alongside the ECOS project team to provide local stone to dress the auditorium.

“ECOS is almost certainly unique in Europe and probably the rest of the world for symbolically gathering the largest monolithic stones that have travelled from such disparate and distant locations to be permanently arranged on one dedicated site for ritual purpose.”

In 2004 Barry designed a further elevated stage and also carved a ‘Tree of Life’ sculpture out of a 4 meter high piece of Portland Stone and nestled it amongst 11 Holm Oak trees. Students from the college designed 12 ‘cultural icon’ figures that were intended to be inlaid into the stage floor surface to bring colour, energy and drama to the area. Barry wanted a surface that would be smooth, durable, hard wearing and that would allow him to create the finish he required.

“My connection with SureSet is Peter Watts who was involved in ECOS from the very beginning in 1989/90.The designs for the European figures were done by students. I did the yellow French figure and worked out the overall design; made the figure patterns with John Brown in Foster Yeoman’s choosing the colour ingredients with your technical department.The whole job was done in summer 2004 on a Sunday, with SureSet footing the whole bill with Peter’s blessing. I look forward to seeing the newly washed figures – SureSet is a wonderful hardwearing creative material (invented by a genius!!!).”

The cleaning of the SureSet paving took place in February 2019, almost 15 years after the initial installation. The team arrived on site and after an inspection of the area and were pleased to find no loose stone, no damage and plenty of colour still in the figures. Confident that the paving was still in prime condition the team cracked out an industrial ‘Rotor Cleanse’ machine and set about removing the years of dirt that had built up on the surface.

Several passes were made in different directions, followed up by a rinse with a lance attachment and within a couple of hours, the paving had been fully transformed back to its former glory.

This is a testament to the quality and longevity of a SureSet installation and provides evidence that our market-leading 21 year guarantee is as good as it sounds. With a life expectancy of over 25 years, the Merlin Theatre can rest assured that the SureSet will remain in place almost as long as the 12 giant European stones that surround it.

For more information on how to maintain your SureSet please download our ‘Aftercare and maintenance guide’ on our downloads page and take a look at the video we produced of the project, with our colleagues at Hallmark Broadcasting.

“ECOS in Greek means tune, or echo, so it has a lovely feeling of something spreading outwards, which is exactly what ECOS is about. It’s about looking outwards to communities beyond our own locality. It’s about not having a narrow vision about the world we live in.”

In 2020 the EcoBatcher will save a project of this size 40 single-use plastic buckets! 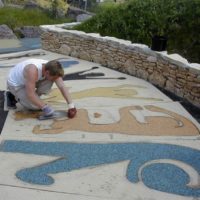 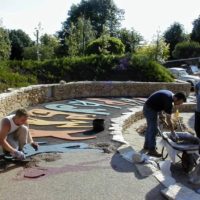 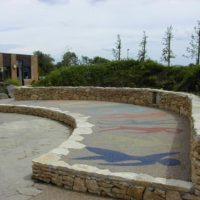 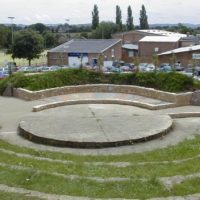 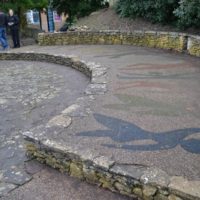 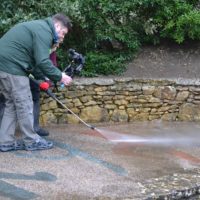 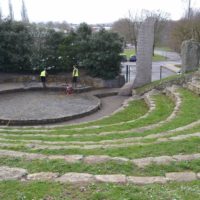 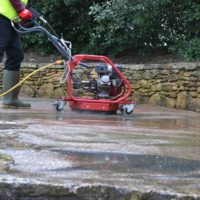 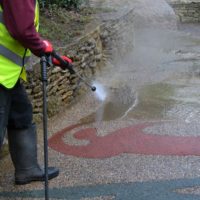 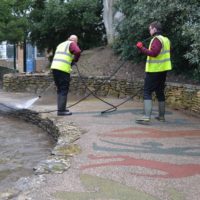 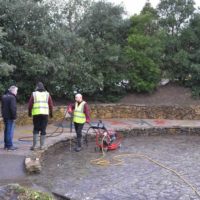