Famous for its jump racing, Cheltenham Racecourse is located at Prestbury Park in Gloucestershire. The dream of all horse owners, trainers, jockeys, stable staff and breeders is to have a winner there.

The Jockey Club announced Kier Construction as the main contractor for a two year, £45m development project at Cheltenham Racecourse in March 2014.

Part of the development included resurfacing some new and existing areas. To withstand the huge number of visitors to this World famous racecourse, the surface had to be practical: extremely durable, accessible and easy to maintain; it also had to be stylish – dressed to impress – just like the race-goers.

With its many benefits, including a 15 year guarantee and no loose stone or puddles, Kier specified SureSet for this high profile installation.

The 3,755m² project included resurfacing the Plaza, the See You Then Terrace, Hurdler’s Hall and surfacing a new pathway.

Working closely with Architects Roberts Limbrick, Landscape Designer Illman Young and Dural UK, who supplied the expansion joints for the Plaza, careful planning ensured that all design components either complemented or contrasted each other.

We returned in December 2015 to install 6m² Sterling Natural Aggregate to some new oval column bases and completed the project in March 2016 – in time for the Cheltenham Festival – with the final 3m².

In 2014, our Approved Installer Pebbo worked with us to install 2,555m² of 6mm Chocolate from our Natural Aggregate range to the Plaza, the See You Then Terrace and, the bar underneath the terrace, Hurdler’s Hall.

With a concrete base, expansion joints within the SureSet were an unavoidable requirement for the Plaza. Dural colour matched their epoxy resin to the Chocolate Natural Aggregate specified and produced 160m of ‘Speckled Effect’ expansion joints, which now blend seamlessly with the SureSet.

A tribute to the history of racing, Arkle now stands in the newly installed Plaza, and slabs with horseshoes from the celebrated Quevega, the first horse to win six times at the Cheltenham Festival, are to be placed within SureSet paving in Hurdler’s Hall.   The whole project is due to be finished in time for the Cheltenham Festival in April 2016.

You can view a news report from ITV about the development of the Racecourse here.

In 2020 the EcoBatcher will save a project of this size 3004 single-use plastic buckets! 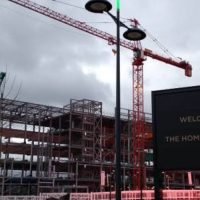 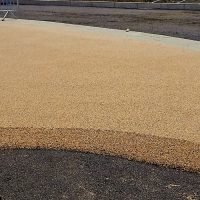 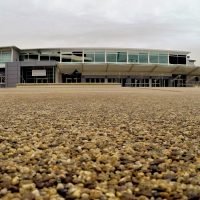 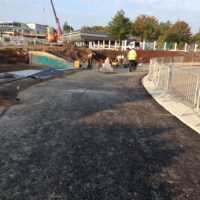 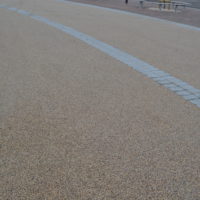 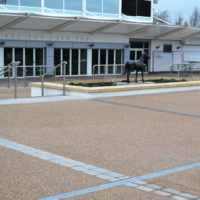 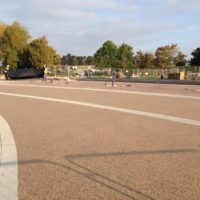 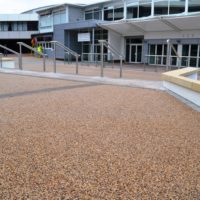 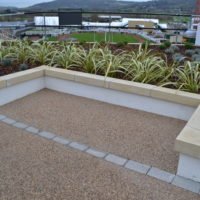