Billy Butlin opened his first resort in 1936 in Skegness.  Of the original ten Butlin holiday camps, today there are three: Skegness, Bognor Regis (opened in 1960) and Minehead (opened in 1962), all owned by Bourne Leisure.

Celebrating its 80 year anniversary in 2016, Butlin’s are nearing the end of a ten year investment plan which began in 2005. By the end of 2015 Butlin’s will have invested £250 million in accommodation, dining, attractions and technology across the three resorts.

A chance meeting with our Business Development Co-ordinator, Hugh Haines, led to discussions that resulted in SureSet being specified for external improvements of the Bognor Regis and Minehead resorts.

As with all leisure paving, the surface had to be durable enough to withstand high footfall, be easy to clean and of course UV stable; for when the elusive British sun does come out!

SureSet was specified for the funfairs at Bognor Regis and Minehead – both in desperate need of cheering up!

The specification for both fairgrounds was to have bright, eye catching paving that would draw attention to and complement the different rides. Large circular attractions such as the helter skelter and swings were to feature outlining colourful rings and the ice cream parlours, seating areas and performance spaces required colourful bases to add interest, and draw attention to their presence.

In 2013 we installed 1,345m² of permeable resin bound paving in Mint Green to the funfair at Bognor Regis.

In 2014 we installed 1,730m² of playful primary colours from our Spectrum® range of recycled glass to the fairground at Minehead.

In 2015 SureSet was specified to create a beach theme at the Plaza outside the Skyline Pavillion at Minehead. The theme was chosen to complement the ‘seaside style’ refurbishment of the existing accommodation. Our talented Installation Team spent the first two days installing the edging ready for them to get creative with the beach theme – which also took two days.

SureSet resin bound paving has brought to life both fairgrounds – turning them into fun, welcoming, vibrant places where bright colours now define the different rides; complementing the attractions and framing the areas.

While in Minehead the beach theme looks amazing and has totally transformed a previously boring and uninspiring area with permeable paving that’s a pleasure to walk on!

The use of Spectrum® for these leisure paving installations demonstrates our unique discipline of combining outstanding attractiveness and creativity with practicality and sustainability.

In 2020 the EcoBatcher will save a project of this size 221 single-use plastic buckets! 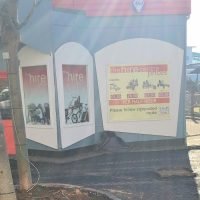 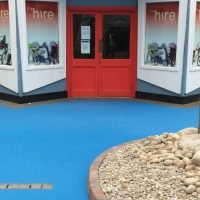 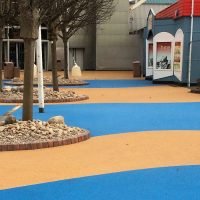 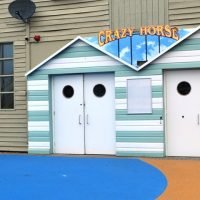